Why I Am Openly Secular 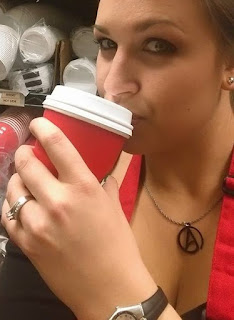 The decision of whether or not to be open about being an atheist or agnostic is a real struggle for a lot of people. In many parts of the world, but especially here in the U.S., it's looked down upon to be secular. I think many just don't think that it's worth the trouble to voice their opinions on the matter or stir up controversy. Some were raised non-religious and just don't really care to get involved. They just want to live their lives and avoid the subject. Others have left religion and don't want to upset believing family and friends with news of their deconversion. Then there are some who can face serious harm for coming out about their unbelief. They may face anything from being kicked out of their home as a teenager with nowhere to go to being hacked to death with a machete for having an atheist blog in the wrong part of the world. For many people the reasons to not voice their unbelief are legitimate and certainly understandable. For others, I would like to encourage them to speak up and be open about their non-belief. Everyone must decide for themselves what is best for them and how honest about their non-belief they want to be.

I would like to share why I have decided to speak up and why I think it's important for those in the position to do so to also speak up.

I want the people who know me to know the real me. If my family or friends like and respect me based on the person I'm pretending to be, then I feel like it's cheap and not legitimate, because they don't actually know who I really am. I am the type of person who chooses to be an open book. You can ask me literally anything about myself and I will tell you without hesitation. A big part of that is because I love to be open and real with people, but another part of that is because I know that being honest and sharing my experiences and thoughts can help others who have experienced the same things or have had the same thoughts and may feel alone.

I know what it feels like to live a lie. I've been there. There was a time in my life when almost no one knew me for who I really was. I lied about everything to cover up for other lies and I sneaked around behind the backs of the people I loved so that I could get away with the shady things I was doing. That was the most miserable, unfulfilling time of my life and I learned from that experience that I cannot live that way ever again.

Honesty was one of the main reason I told everyone in my life that I am now an atheist. I figured that if I lost relationships over this admission then that was a relationship I should lose anyway. I don't want relationships with people that are based on a lie about who I am, what I believe and how I view the world. The relationships worth keeping are the ones with people who like me for who I really am.

That being said, honesty doesn't mean that I need to say, publicly, everything that is on my mind or share every Facebook post that I agree with that may be offensive to the people I love. This is where the thin line is drawn between being honest about who I am and being unnecessarily offensive and rude. I'll admit that I've crossed this line for myself from time to time. Just because I'm passionate about secular values doesn't mean I should drive a wedge in the relationships that I hold incredibly dear with believers. However I do feel a need to walk that line because there are some things that I believe need to be said that may come off as offensive to some, but that I feel are extremely important. I will explain why below.

I am in the position of experiencing very little loss or resistance for my unbelief (aside from the personal grief of losing my faith). My family is loving and accepting of me; I have a job that is not in jeopardy due to my unbelief; I have an amazing husband who will stay by my side and support me no matter what; and I live in a country in which I can speak my mind freely and openly without fear of imprisonment or worse.

With this combination of circumstances I feel that I am in the perfect position to speak up and I know that many people in much worse circumstance have spoken up and dealt with the consequences. To not do so myself seems criminal in light of their sacrifices.

I've been asked the questions, "Why do you have to be so public about your non-belief? Why not just keep it to yourself?"

I've thought long and hard about these questions and only under the following circumstances will I keep quiet:

When the religious stop pushing their beliefs and religious ideas on others;

When the religious stop trying to legislate based on their specific religious beliefs;

When children are no longer being indoctrinated to believe that there is something wrong with them from the day they were born and that if they fail to follow the specific god that their parents believe in they will be sentenced to an eternity of fiery torment or otherwise punished;

When facts, evidence, science and true history becomes what children are taught in schools;

When gay, lesbian, transgender, bisexual and queer people are no longer discriminated against based on an ancient book;

When LGBTQ and atheist teens are no longer kicked out of their homes with nowhere to go;

When what is counted as more important is a person's love and kindness toward the people and the world around them rather than what god they believe in;

When young people can be taught safe and healthy sex practices to keep them alive, healthy and free of unwanted pregnancy instead of taught that having sex is defiling their bodies and they just shouldn't do it;

When violence in the name of an invisible being ceases to be an issue in our world;

When discrimination and hate are no longer backed up by scripture that people believe is the word of god;

When women are held at the same level of respect and authority as men;

When women's sexuality and bodily autonomy is taken seriously;

And when a person can share publicly that they are an atheist and not lose their job, reputation, friends, family, home, marriage, children, political standing or their life.

Until these things are a reality I will not keep quiet.

I care about this planet, the people who live on it and especially my children. I want this place to be a better place to live for the generations that come after me and I can't sit back and hope that other people do it for me. I, personally, feel a strong desire to be involved in the process of creating change and making this a more loving, accepting and reasonable world. Whether my impact is big or small doesn't really matter to me as long as I'm doing something.

I firmly believe that a world based more strongly on secular humanist values will be a much better place for our future generations to live. No matter how much comfort religious belief offers a person, truth and reality are far more important, especially in the long-term. If a person believes that this life is just a blip in their eternity or that Jesus is coming back soon, how can they possibly take seriously the future of our planet and our children?

One more thing that drives me to be openly secular, aside from my passion for justice and change, is the fact that being an activist and being involved in creating change is where I find meaning and purpose for my life. I believe that we are all responsible for creating our own meaning and for making a difference in the lives of the people around us in whatever way we can and secular humanist activism is my niche. This is where my passion lies. Loving and helping people is my mission and, in doing so, I've never been happier or more fulfilled in my entire life.

To learn more about being openly secular:
openlysecular.org/